Irish case study: Renovating a 1960’s house in the West of Ireland 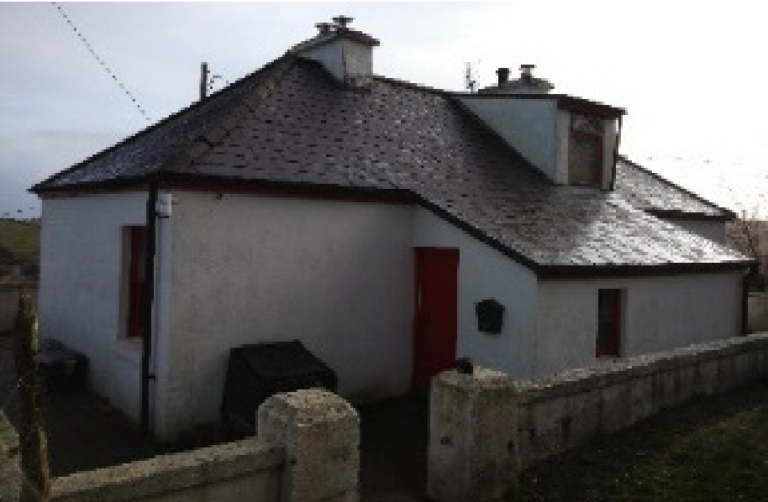 Type of house and work undergone:

It is a solid masonry wall house (94 m2 heated floor area) constructed in the 1960s occupied by a family of four, including two children. The house underwent substantial work, including retrofit measures to the building fabric and heating system. Double-glazed PVC windows and doors replaced single pane timber windows and doors; 100 mm expanded polystyrene external insulation and acrylic render were added to the solid masonry external walls. Electric storage radiators and instantaneous domestic hot water heaters were replaced with an air source heat pump (ASHP), heating controls, radiators, and a hot water tank. In addition, a 2.1 kWp PV system with an inverter was installed. It should be noted that the habitants used electricity for space heating and water heating pre and post-retrofit (as well as for lighting and appliances). Case A had an ASHP installed as part of the retrofit works. In this case, to normalise the space heating energy using HDDs, it was assumed that 61% of the electricity usage for Case A was related to space heating, based on the finding that 61% of end-use residential energy in Ireland is accounted for by space heating. The remaining 39% of electricity energy usage was normalised to kWh/day.

The household experienced benefits across multiple KPIs. Despite having an investment of close to EUR 30,000 (net of grant), the householders are predicted to achieve payback for the works within 10 years, providing their post-retrofit energy demand remains constant during this period. Even without grant aid, the householders would achieve payback within 15 years. The householders reported being very satisfied with their thermal comfort following the retrofit. Post-retrofit, the average household temperature increased by 3.1 ◦C and RH decreased by 10%, respectively. In addition, one householder felt that the thermal comfort improvements helped address the health risk their home posed pre-retrofit, stating “the house was a health risk before . . . something had to be done or we would have had to move. Our quality of life has improved”. Furthermore, the householder reported that previous issues with draughts, cold, condensation, mould, and dampness no longer persisted post retrofit.

While the householder noted that “no major hassle was caused” by the works, they believed the retrofit process overall could be improved with better engagement with contractors, more choice in the design of the retrofit, more information on maintenance and guarantee of the technologies, and a better financial payment plan for the works. Regarding the level of engagement with contractors throughout the process, the householder stated, “no choice was given in the design of the windows and doors installed”, or in the location of the PV invertor to allow convenient monitoring of when the panels were generating energy. In relation to the technology installed, the householder stated, “no one showed us how to use anything. They simply installed them and left. They didn’t tell us how to maintain these technologies”, while also adding “no details on product guarantees were offered either”. Furthermore, the householder was not satisfied with all the retrofit measures installed. In particular, the householders criticised the PV panels, stating, “the (PV) panels don’t generate electricity consistently, so I don’t think I’m getting the payback I thought I would. No one told me that I might need a battery to store the energy I’m not consuming until after, and those are very expensive”. However, despite the issues with the retrofit process, the household achieved a 71%, 65%, and 59% reduction in secondary energy, primary energy and carbon emissions, respectively.